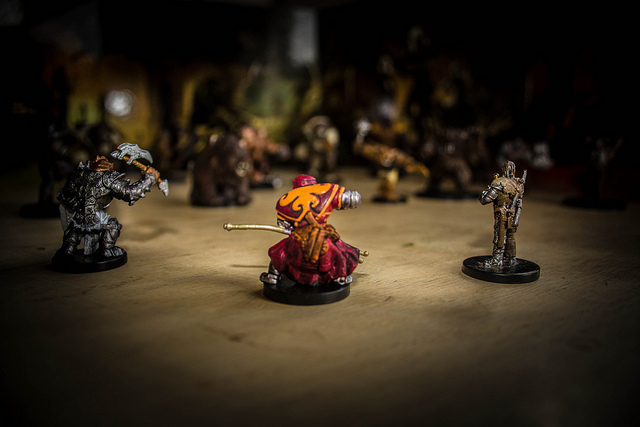 One of my favorite things about being a GM is when I set the scene and the players just run with it and practically take me out of the conversation loop. I love to see people being creative and I think that’s colored my mood and my opinions about roleplaying systems lately. For the last 3 years I’ve been running 3rd edition D&D, which I feel has been something of a drag to the creative process. It was a system designed for dungeon dives and epic battles, and it does a fine job of it. Whenever you’re not in combat though, it leaves a great deal to be desired. My games, the long running ones anyway, revolve primarily around the not-in-combat times.

This is why I’ve been spending a good deal of time looking for the bigger better deal. Most of the games I have been excited about in the last year all incorperate player interaction as part of the game and character progression. Games like Burning Wheel, FATE Core, Dungeon World, and Tavern Tales all help the player to be interactive in by their design. Most of those games also put some level of narrative power directly into the players hands. It’s a very exciting concept for me as GM, and a little scary for some of my players.

I have to admit that part of my desire to have a system that integrates more player interaction is because a lot of my time as a GM is spent trying to get my players out of passive mode, which seems to be their default state. Getting players to be proactive, rather than reactive, is not easy and I’m excited about any tools I can get my hands on to assist me. The landscape of roleplaying games has come a long way since 3e came out, and very much for the better.

As a GM on and off for the last decade or more I’ve had an opportunity to re-learn what many GMs before me already knew. The best lesson is that a game is only fun if the players are having fun, and it takes an engaged player to have fun. Engaging players takes good writing or player interaction. I’m sure that once in a great while I manage to bang out some plot device that is exciting, probably completely by accident, but most of the time I make an effort to draw my players into essentially doing my job for me by getting them to get into their characters and give detail. The more detailed characters I have to work with the more likely it is that I am going to have material to work with that will be interesting to the players, because their character will be interested. Too many times I’ve run or played in a game where the plot blew past the party without a soul noticing or interested. If I know details about a character I can often get them engaged just by referencing those details in a relevant way, like a characters favorite food, color, or badger.

I hate making my players write stuff down or type stuff up, but I write so much better when I have something to work with. I am hopeful that the next campaign I run I will have lots and lots of opportunities to interact with my players to give them the exact type of game that they want to play.

→Learning from my nephew