According to my notes, we started playing Kingdom Death: Monster one year ago (October 21, 2017). The eighteen pound package arrived on my doorstep on October 18th. It’s been a good year, with a lot of sessions to keep us busy! For the anniversary I thought I would remember some of notable events from our games in the last year.

Suddenly, a monster emerged from the darkness, its eyes wild with hunger. It attacked.

Upon receiving the game I immediately assembled the base elements needed: 4 starting survivors and the White Lion. It had been many years since I had done any kind of miniatures work, and I certainly hadn’t done any assembly before, so I think it went pretty well. The Lion is (of course) the least well assembled mini I’ve done to date, I may break down and replace it someday or perhaps I will just keep it as the reminder of where it started. I remember the whole process being thrilling at the time. The newness of the activity was certainly exciting, and I found the setting and initial story of the game very compelling. Cracking open the rule book I was vibrating with the desire to get started. I didn’t have to wait long.

We got started early Saturday morning so that we would have all weekend to enjoy it. The game’s creator, Adam Poots, spent so much time and effort on the setting, the art, and the story of this game, so it is very important to always read, aloud, the story events as they occur. Four of us gathered around the table preparing to take our first steps into the land of stone faces. The layout was extensive, the giant game board was high quality with gorgeous artwork. The first session of play, referred to as the prologue or year zero is laid out very explicitly which made it easy for new players. The monster attacked, we had no names, no language, and only shards of stone to help us slay the White Lion with the strange hands. The world was absent of all light save for each survivors lantern, and the ground was made entirely of carved stone faces. The long battle for survival had begun.

The cooperative, turn-based nature of the game made it an instant success for us. Each step is carefully planned and discussed, ideas flow back-and-forth, and novelty is enjoyed by all. The monsters are deadly and you have to plan well to survive. We came out of that initial fight and into the year one game play, known as the settlement phase. During this phase one lantern year passes and you have time to learn, grow, and prepare for the next hunt.

The strategy of the settlement phase is entirely different from the strategy of the showdown. During settlement you have to decide how best to use your resources to prepare for the hard times to come. You receive a limited number of randomly drawn resources after hunting a monster, and those resources enable your decisions. This turns out to be one of my favorite parts of the game. I really enjoy discussing plans and discussing strategy options. Do you spend resources for short term gains, or save them for future benefit knowing that there is a chance you will lose them in the meantime. Which innovations do you pick? Which buildings are important to pick up? How do you react to story events? What should you spend endeavors on? I’m sure that for some people the settlement phase is the shorter part of the game, but not for me. 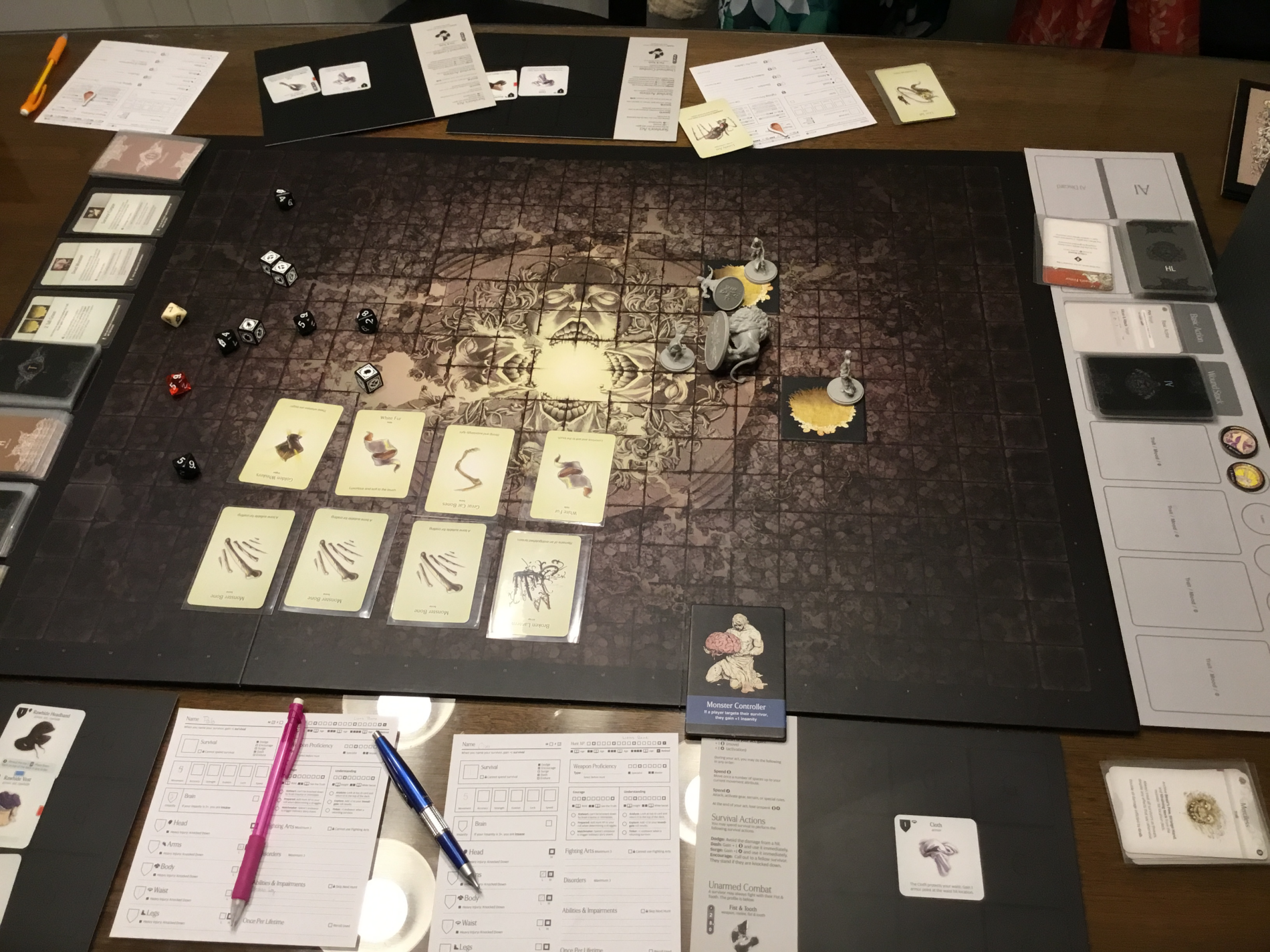 The year one White Lion fight is one of the most difficult fights you'll have for several game years.

We spent the whole weekend playing and got into year three of the game (the game can go to year 30 or more). The story events were gripping, giving the setting real life. Everyone at the table was very engaged and emotionally invested. The art in the rule book and on almost every card game the setting so much life. It was dark, scary, and uncomfortably human. We could tell that throughout there was more going on behind the scenes than what was exposed. So far we had only fought the one monster, the White Lion. At this point I hadn’t had time to assemble the Screaming Antelope, which we would be fighting next. We immediately scheduled our next session, with much anticipation.

As I said at the top of the post, that was a year ago. Since that time we have gotten together as often as possible (one of our players is several hours away) to continue on this journey. Over that time the game continued to engage us as no other game has before it, with the possible exception of tabletop RPGs. The story continued to keep up engaged, though the story elements thin out a bit after the first ten years. The unfolding strategy continued to keep us discussing possibilities endlessly. We continued to have emotional engagement leading to some times when we needed to stop playing and take a break because of emotions getting in the way. This was just our First Blood group, mind you. I’ve started several other games during that time and they are very engaging as well, though finding time for all those games is difficult. 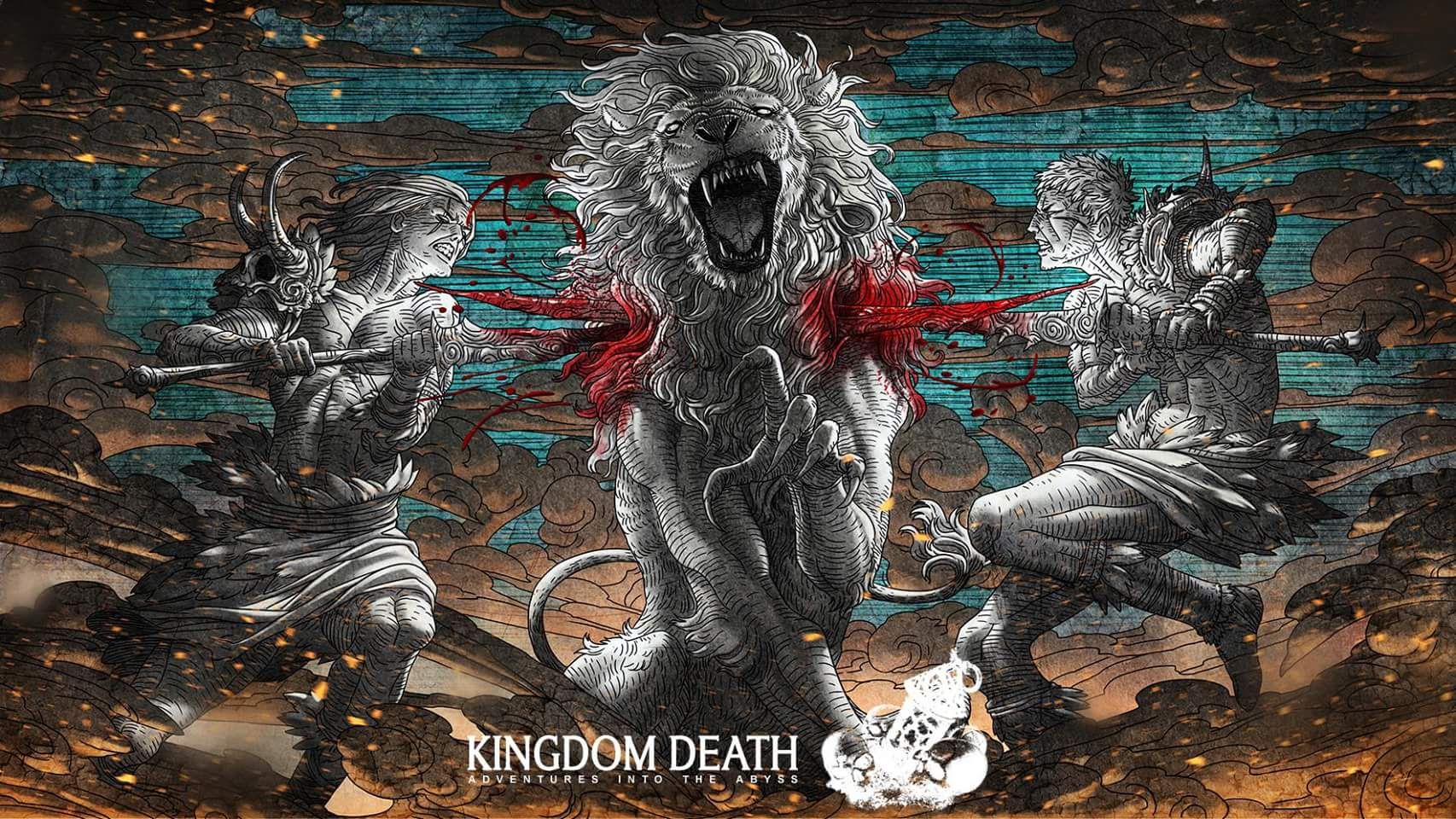 Our most memorable character is a survivor by the name of Topso. He was one of the founders of the First Blood settlement, meaning he was there in year zero. One of the things that you can do in the year zero fight is guarantee a point of strength to one of the survivors which is what we had Topso do. So he came out of that fight the strongest of our survivors. That strength served him well, however, it was not long until he acquired marrow hunger by eating the skull of a fallen survivor. After that he acquired a taste for it. The following year he murdered our best hunter and ate his skull too. Our settlement put him on a throne and declared him the greatest of our survivors, for his might was obvious and great. He sat upon his throne for many years, but his marrow lust could not be slaked, and once again he killed someone to sup upon their skull. During the intervening years our settlement had acquired a sense of community and the days of rule by Topso came to a close. His newest murder was frowned upon and the people cast him into the darkness, telling him not to return.

Topso would not be cast out so easily, he returned from the darkness carrying a lump of material that our settlement had never seen in its raw form before, but we knew its value because it was of the same material that our lanterns were made. He could not tell us where he had found it. Reluctantly we welcomed Topso back into the settlement, proud of his strength, but wary of his hunger. A short time later, once again Topso could not hide the fire of his marrow hunger, and we found ourselves casting him out into the darkness once again, certain that this time we would be rid of him for good. Topso’s strength and will to survive did not fail him. He returned, once again, carrying more of the precious material, iron. Once again we exchanged his life for the valuable material, but the settlement resolved to deal with his hunger for good. The settlement worked to help Topso, and soon his marrow hunger was replaced with full-on gluttony. At least he wasn’t killing people anymore.

Topso went on to become the greatest axe hunter the settlement ever knew, and he trained others in his secret axe techniques. He claimed to be immortal, and while no one really believed him, he’s shown himself to, so far, be unkillable. Because of his strength and skills Topso was greatly desired in the settlement, and he fathered many children, who shared his affinity with the axe. His first child also claimed to be immortal, just like his father. No one could deny the greatness of Topso. 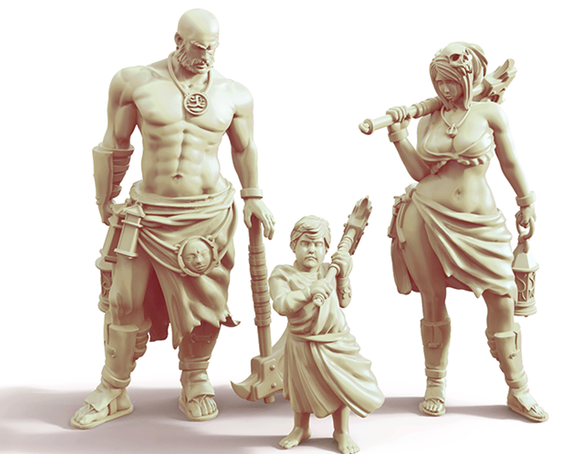 Upcoming content Axerman Family which I think is a perfect representation of Topso.

Almost exactly one year to the date, we are finishing up our first game. We fought very hard to be successful throughout, and it would seem that in every meaningful way, we were. Which is not to say we won. I’m not sure you can win, but things took an unexpected turn at the very end. There is a very difficult fight toward the games finale, called the Kingsman level three. I was not sure we were going to come out of that fight victorious, but we went in with every tool at our disposal and actually defeated him successfully. One of our characters, Glow, was never going to return from that fight, due to a fatal curse; she had faced the Kingsman before. Even so we defeated the Kingsman and returned home in glorious triumph.

Or so we thought. Upon returning home and beginning the settlement phase, you draw a story event card. This time we pulled a card called Clinging Mists. Like most story events this one has a die roll and several things which can occur based on the result. When I drew that card the others at the table lit up because they knew about one of the possible outcomes (we had drawn this before). It’s important to note at this time that the three returning survivors were: our settlements leader, Topso, another founding survivor, Robin, and the remaining twin from our settlements first birth, Romula. All from the very beginning of the game. This was not planned in any way, it just happened to work out (something I’ve said in this game more than once). While attempting to navigate back to the settlement, the three returning survivors became lost in the clinging mists and were unable to locate their home. They wandered and wandered, but never found their home and families. Instead they came across a horde of lanterns, much like the one they found 28 years ago. In the nightmare world of Kingdom Death when things like this happen the only way forward is to continue to survive. Topso, Robin, and Romula all waited at the horde of lanterns for more survivors to appear, and to once again start a settlement that they could call home. They knew that the previous settlement would not survive without the weapons and equipment that now being used to create this new settlement.

The final act of our first game will be the destruction of First Blood by the monster called the Gold Smoke Knight. We are heartened that the roots of that settlement will live on in the survivors that got away to start another settlement. Maybe this time they will be able to push back the darkness for good. 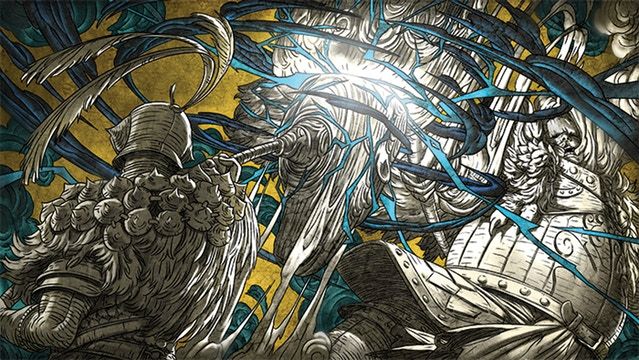 First Blood, part II will have to wait for another time, because that settlement will be starting out with the in-game equivilant of machine guns it is going to highly unbalanced. There are twelve expansions currently available with lots of brand new content, and we are very excited to try them. In order to experience that content the way it was intended to be experienced we are going to start a brand new game and return to this group (maybe a year from now) when we’re revisiting old content, or when we’re convinced that it will maximize enjoyment. In any case, I continue to be very excited for each new game session.

(all art in this post owned by Adam Poots)